In the second of our posts on the candidates standing for the Labour leadership, we shine the spotlight on Jess Phillips MP. Over the coming weeks we will analyse the program and policy of the candidates as and when they step forward. The first post, on Rebecca Long-Bailey can be read here.

For those on the left of the Labour Party Jess Phillips needs no introduction. For Phillips, no lie is too big, no slander too far and no racist slur too low.

In the short (not short enough) time Phillips has been an MP she has declared her intent to ‘stab Corbyn in the front’, called the police (and announced this over Twitter) when a traveller community arrived in her constituency, and lied in the press about telling Diane Abbott – the MP who receives by far the most abuse of all MPs – to ‘fuck off’.

Then Phillips delivered her masterpiece. In the best traditions of Enoch Powell, Sarah Champion MP (Rotherham) wrote in a piece for propaganda rag The Sun (10.8.17) that “Britain has a problem with British Pakistani men raping white girls….these people are predators and the common denominator is their ethnic heritage.” How did Phillips respond to this racist? Phillips openly defended Champion, stating to The Times (26.8.17) “The British Pakistani-Bangladeshi community, certainly where I am, has issues about women’s roles in a family, in society. That’s the truth.” That either of these MPs remain in the party – much less continue as MPs – speaks volumes of the work done by Labour’s disciplinary body during Iain McNicol’s time as general secretary.

Phillips has not been too busy to make some new friends though. 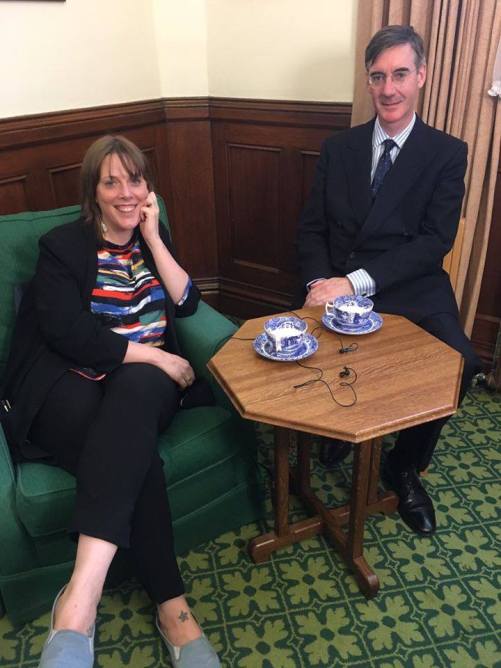 It may also be difficult for members to forget the occasion Phillips was caught laughing at the exit poll result by Channel 4 on election night. It is a measure of how far the right wing of the PLP degenerated under Blair and Brown – even from the days of such political pygmies as Kinnock and Smith – that Jess Phillips could be seriously proposed as a candidate for leader by the right wing.

Given the outrageous racism, the attacks and the slanders Phillips has launched against members and Corbyn alike, the idea that she is making a serious bid for the leadership is highly improbable. There would need to be a change in membership in the order of hundreds of thousands of people to provide a group of actual human beings willing to vote for Phillips for her to stand a chance of winning. It is more likely that Phillips has entered the race as a way of making the other right-wing candidates in the contest appear at least palatable by comparison, and to strengthen her position when the time comes for horse-trading for shadow cabinet positions if the right-wing takes back the leader’s office.

However, in the unlikely situation that Phillips does go through to the members vote, we wrote down all the reasons Labour Party members should vote for Jess Phillips MP to be leader of the Labour Party.

If anyone can think of any reasons to add to this list, then please get in touch via our email thestruggle.org.uk@gmail.com, so that we can forward your suggestions on to Phillips’ campaign team.

If you found this post useful please consider sharing it via the buttons below, or by copying the link from the address bar.